Courtesy of the lovely Nettie Thomson at Meldrum Media, I now have a lovely new website - the place I'll be keeping in touch with everyone from now on.

You'll find info on my books, can catch up with my blog, read news and reviews etc. So please head on over and have a ganders.

Thank you to everyone who's followed me here, I hope to see you all at my new virtual home too.

Can't wait to hear what you think of it.

The Bookworms of Carnforth

As both a reader and an author, it's always nice to chat to fellow book lovers. So when the Bookworms in Carnforth invited me along to one of their meetings obviously I was more than happy to join in the fun.

I met a great bunch of women, each of them sharing a lively interest in all things literature. Which is probably why, after giving me the warmest of welcomes, they happily dove straight in with their questions and why the next two hours or so seemed to pass by so quickly.

During this time we talked about Going Underground, a discussion that included some wonderful and very much appreciated feedback (thank you, Ladies); we discussed aspects of the writing process, as well as the publishing industry in general; and we even touched upon author Stephen King and novel Fifty Shades of Grey... The latter providing an opportunity for one of the group to produce a photograph she'd previously taken - a photograph of a cloud shaped just like a man's... ahem!

And finally, I was asked to do a reading, enabling me to introduce the group to Little White Lies and Butterflies.

As its author, it was lovely to hear everyone spontaneously laugh out loud and in all the right places. Such instant feedback isn't just invaluable from a writing standpoint, it makes the book's up and coming release all the more exciting x 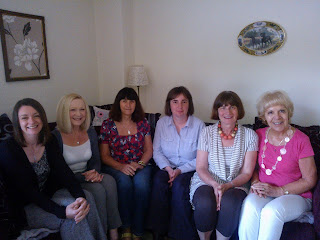 I'm blogging over at Jera's Jamboree today, talking about my love of stationery...

Please hop over if you get the chance. As well as featuring the likes of me, it's a great place to get the latest in book reviews! x
Posted by Suzie Tullett at 03:47 2 comments:

Six years ago this Summer, I found myself moving to Greece. It wasn't planned; it sort of just happened. I mean my dream had always been to find a little cottage somewhere in France.

I'd often envisage myself meandering through the French countryside behind the wheel of a little Ape 50 or Citreon Dolly, nipping into the boulangerie for freshly baked bread or just savouring a coffee whilst watching elderly gentlemen play boules in the village square. Naturally, in my imaginations I was also fluent in the lingo... All very romantic, I know.

Honestly, it felt never ending and like most people in the UK that year, we became desperate for a bit of sunshine. Although I suppose Rihanna's 'Umbrella' being at number one in the music charts for seven weeks during that time didn't exactly help any. So out we came to Greece instead, ready for some well earned respite and I've been here more or less ever since.

Tomorrow, however, I leave for good.

Of course, I'm excited about starting a new adventure somewhere else, but I have to admit I also feel a little sad. Although it's not hard to see why, is it? 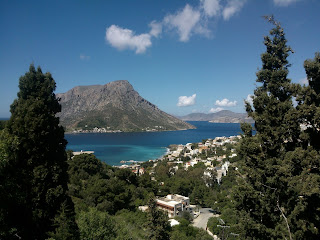 Kalymnos has been my writing retreat all these years and not only has it provided me with a fantastic setting for the latest book, I've met some wonderful people along the way, some of whom I've included in my blogs from time to time and who I'll no doubt miss.

People like my neighbour, Birgitta. Not that you can really see her in this picture, she's worse than me when it comes to getting in front of the camera and would only let me finally show her face if you can't actually see it! 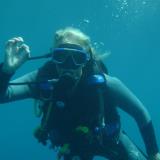 Then there's the lovely Birgit. A German lady who runs the dog rescue shelter here and is responsible for introducing me to both Roma and Nanos, the newest members of the Tullett clan - both of whom I couldn't be without, so for this I'd like to say a big thanks. 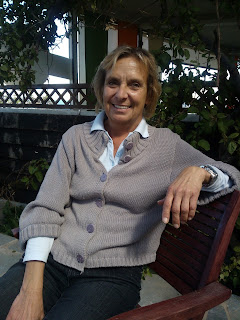 And I can't forget Nicolette and Daniel. Not only does Roma seem to have a crush on their little dog, Gina, they're also lovely neighbours and run the most fabulous ice-cream shop on the island!  On the planet even! Something else that I'll definitely miss when I leave... Wonder if once I'm settled I could pursuade them to up sticks themselves and set up nearby? 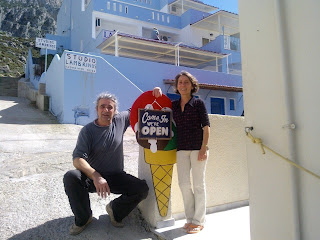 Next is Ruth and Carl, fellow Brits and again such lovely neighbours even if they do like to spend their time hanging off one rock face or another! I know, I much prefer the safety of terra firma too, but hey, who are we to judge? 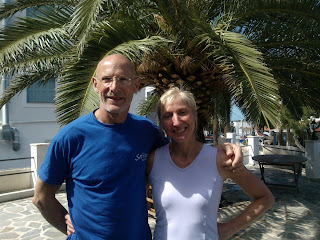 As you can see, Kirsten is more like me - much prefering the calming effects of a glass of wine to the excitement of an adrenaline rush. Although to be fair Carl and Ruth have also been known to partake every now and then - something I saw with my own eyes only the other night. 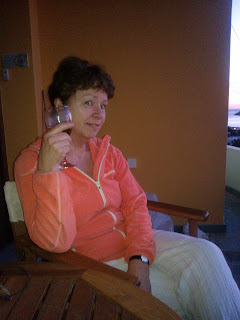 Next in line is Geraldine, a very nice lady who's become a fixture around these parts over the years. A fantastic climber, who also kayaks and sails and does all the other mad stuff I try to stay away from. Although I'm more than happy to cheer her on from the sidelines, a gesture I'm sure she appreciates.

She's stood with Stelios, a Greek chap from Athens who spends his Summers here doing Yoga and surprise, surprise climbing... He also likes reading and tried to introduce me to Edgar Allan Poe last year. Unfortunately, the cover alone was enough to put me off but you've probably already guessed that 'scaredy cat' could quite easily be my middle name.  Although for those of you who've read my previous posts, as middle names go, 'scaredy cat' is probably preferable! 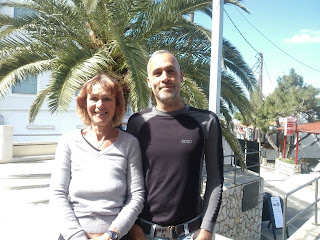 Last but certainly not least, is the Klonaris family. From left to right - Sakis, Theme, Panormitis, Petrula and Dimitra... Such a welcoming family you wouldn't believe - they've plied me with coffee every time I've needed a change of environment when writing, fed me and as a woman here on my own a lot of the time, looked out for me. A truly wonderful family that I will never forget. I thank you with all my heart. 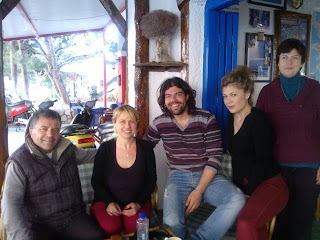 Missing from the Klonaris picture is Eleni. I'm not saying she was purposely avoiding the camera, however, she did seem to keep disappearing off in the car whenever I was around yesterday... Sorry Eleni, but I couldn't leave you out and despite what you say, you look as lovely as ever here... 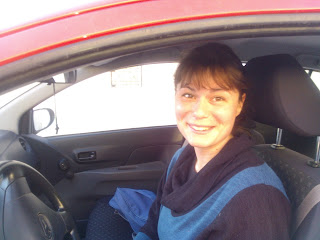 Now I suppose it's onwards and upwards in the next chapter of my life... An exciting prospect tinged with a little bit of sadness as it goes without saying that I'll miss everyone above and everything the island of Kalymnos has given me.

I just hope wherever I end up next it isn't raining... otherwise I just might have to come back! x
Posted by Suzie Tullett at 02:44 21 comments:

A couple of weeks ago, I told you all that I've been keeping the biggest secret ever. Of course, I understand the reasons why I've had to keep schtum, but maintaining my silence has been one of the hardest things I've ever had to do. In fact, I'll go one step further and say it's been torture. I'm such a scream and shout it from the rooftops kind of person!

Anyway, having been given the go-ahead to reveal all (drum roll, please) I'd like you to raise a glass for my son, Benjamin, and his beautiful wife, Cindy... 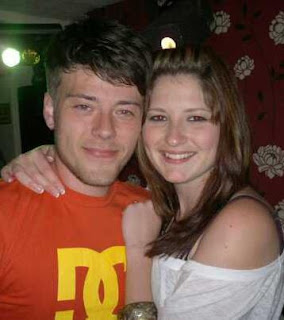 Yes, everyone, (getting tearful as I type this) they're going to have a baby!

I know, I know, I'm way too young to be a grandmother (and too glamorous, I hear you say - obviously) but I soooooo can't wait. This baby is an absolute gift. And to us, at least, already the most adored little being on the planet.

I wonder if we'll have a little boy to add to our fine male Tullett specimens? 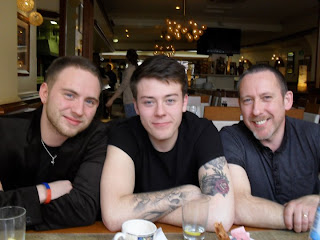 Or a little girl to make the numbers up? 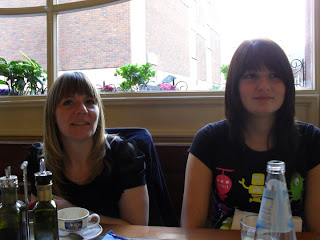 Not that it matters, either way, as long as the baby's healthy.

Although the happy parents-to-be do plan on finding out the sex and I, for one, can't wait... Knitting needles at the ready.

So there you have it. That's what I've been forced to keep to myself these last few weeks.

Anyone of you got any happy news you'd like to share? x
Posted by Suzie Tullett at 11:49 16 comments:

Every week, the lovely Paulita Kincer (Author of The Summer of France) takes part in a weekly bookish meme. The point being to introduce the first sentence of her current read, along with a random teaser, to all the other Tuesday Teaser participants.

A great way to share books and grabs a readers interest, don't you think?

Anyone can play along, so if you want to join in please head over to Paulita's blog http://paulita-ponderings.blogspot.gr/2013/02/first-paragraph-teaser-tuesday-going.html where you can find all the details.

And guess what, Guys, this week she's featuring Going Underground!

Will my first sentence grab you? x
Posted by Suzie Tullett at 00:20 No comments: 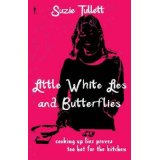 How exciting, Little White Lies and Butterflies is now showing on Amazon!

Yes, there's still a little while to go before the publication date, but if you pre-order now from the UK you get the price guarantee:

And on Amazon US you can sign up to be notified once it's available:

Hope you like the cover and blurb; this book was certainly a lot of fun to write.

Happy reading, everyone and as always, thanks in advance for your support x
Posted by Suzie Tullett at 13:30 2 comments: 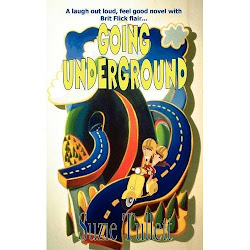 GOING UNDERGROUND - Three men on two scooters (a vintage Lambretta and Vespa) heading down the country to Brighton... three women and a heavily pregnant belly in hot pursuit - all squashed into a classic, Union Jack roofed mini... with an off duty Police Officer bringing up the rear... and with musically themed chapters, it even has its own soundtrack!

Suzie Tullett
Going Underground is my first novel and its setting was inspired by my observations of the Mod scene, having been married to a Mod for quite some time now. Of course, it's not a social critique in any way, it's an entertaining physical and emotional journey that uses the fun and nostalgic elements of Mod to weave a very human story - elements that we can all enjoy and identify with. I'm a full time writer, lucky enough to live between the UK and Greece. And when I'm not tapping away on the computer creating my own literary masterpiece, I usually have my head in someone else's. 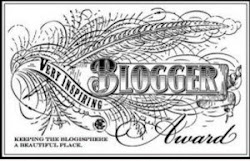 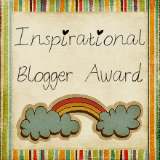 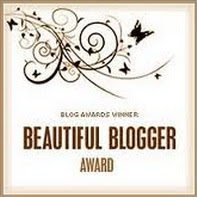 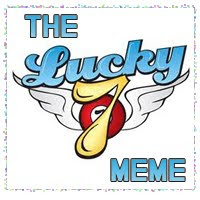 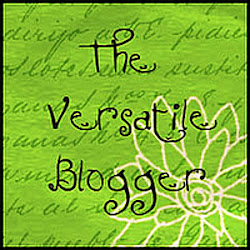 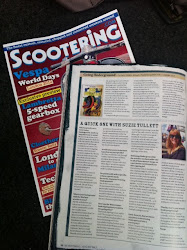 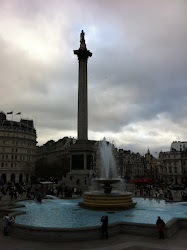 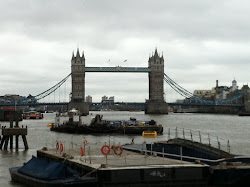 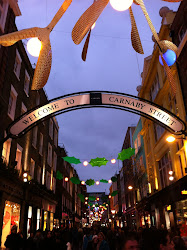 The Houses of Parliament & Big Ben 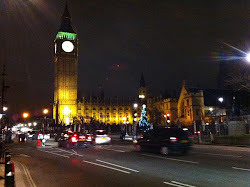 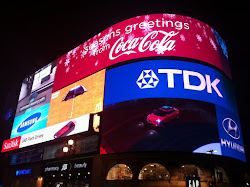 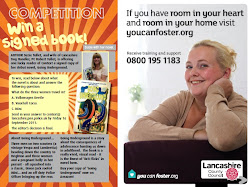 If you haven't already guessed, I'm the one in the insert sporting the overgrown German helmet number... Less than perfect, but certainly one of the better photos... 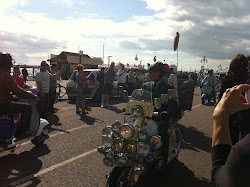 Just one of the many scooterists... 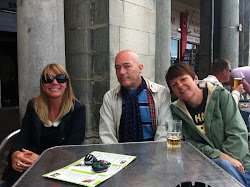 Me, Mark Sargeant from Scootering Magazine and his partner, Carol